Alright, it's good to back on blogspot~

It's good to back on the nice-to-use blogspot. Wretch practically pissed me off in everything...

Today is friday, morning datacomm class was canceled due to our lecturer mdm.Fatin's proness. Why i said so? Hereby i quote a sentence told by her to the class:" We can cancel 1 whole week of lecture class, but we are still too fast in front of the syllabus.". Get me? She is like a bullet! This week is week 4 in our academic calendar, but our datacomm lecture already sampai lecure 10! WHAT THE FUCK! NVM, let it be. If any dare devil are reading this, please tell her in the next lecture, "STOP ASKING "YOU GUYS UNDERSTAND OR NOT?" IN A DAMN ANNOYING TONE".

After the datacomm class i should attend to the Applied Cryptography tutorial class but i suddenly remember i want to make a new blogspot. I look at my watch, its just 8.10 a.m. so why not lets start some of the part. TIME FLIES, when i look at my watch the second time, its 9.20 a.m.. =)
So, now here i am, typing a blog after constructing a new blog skipping a tutorial class. This feeling is acceptable. =x

Skip the stories, talk about the happenings.

Aside from the sad thing happen 1 month + ago. Which i fight very hard to get over and im getting very well over it, there's alot of changes around me. Which here i mean from my point of view, while im trying to view it on another angle, i cant really clearly see wats the situation. Some of it, after advice from friends and mummy, i can just dun give a damn, some other, i just need to be wiser to know the answer i think. Alright, pictures~:

First happening here, tho my kawan baik UK dah blog about it, i still want to talk about it again, the starting week of a semester always is so relaxing arent we? I remember that is a good ol'Friday! basically i wasnt in the primary plan to go out to New Jusco Melaka, but i just feel like wanna go along. So i vr thick face like that asked uk whether i can follo. =x
Then here we are, the lunch stop at THE GARDEN, JUSCO MELAKA. 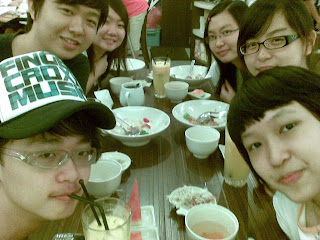 half a dozen of trying, finally we manage to capture 1 can see every ppl's head and mouth.
Some simple introduction for the garden. The concept this cafe is running on is healthy foods. Less salt, less oil, full organic ingredients, skinless chickens and meats, whole grain rice?(糙米), healthy soup whick UK loves it. Recommend for folks who wanna try out some healthy stuff but do not expect heavy tongue sensation from them. 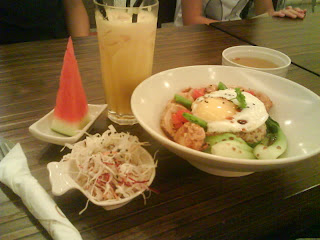 The food, all 6 of us having the same set except the drinks. 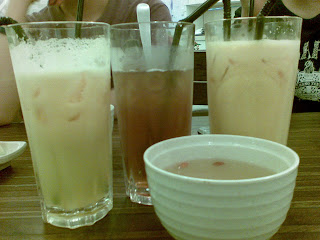 Drinks with the soup (I forget which is whose) 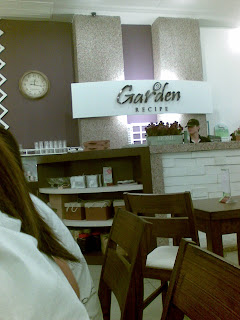 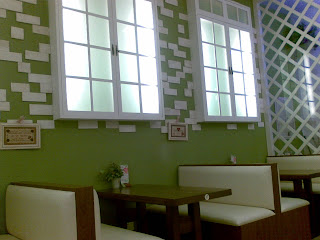 The environment, not bad actually except i dun like the green =x
Also the seat also tak nice enuf. =x
After the "not-really-vr-vr-nice-still-acceptable" lunch for me, we went on to the window shopping part. Real story of the day happen there when Mr.RoxasCyclops arrived on earth :~ ~ 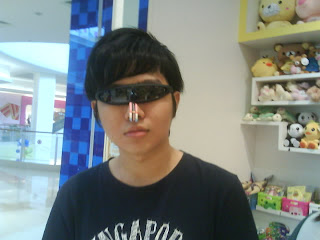 Well i think he forget to take the luggage tag off his spec after the arrival. 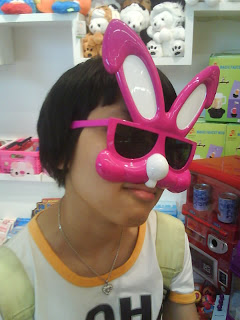 Erm, rabbit-dog?
We actually walk the whole building during the free time we have here. Some creatures are fighting in the building too! Wat a spectacular JUSCO! 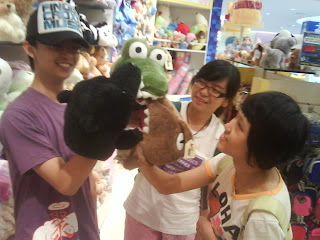 erm tat black thingy is a bear btw......
Walk around played around. Ignoring those shops' personnel which look damn nervous but do not dare to get near us. LOL
After that was a shoe window shopping spree. Which i gladly got ntg much to write because what me and Mr.UK did was following Miss.Fong Yee, Miss.Daby, Miss.Purple, Miss.NoobTeng around or sitting on a sofa and frown. LOL
Enough for that lah. Details on the outing: http://heartroxas.blogspot.com/2010/06/week-of-sleepless-nights.html
The second thing im typing here, i hope it wont be too long. No guarantee on that. Today is friday, start from last week thursday, 9 days ago, i've been non-stop exercising.
Last thursday was badminton day. Thursday is totally a free day for most of my coursemate. They got totally no class except i got a 9-11 OOP tutorial. So after the tutorial, me, UK, Khesvin, Sifu, Aaron and Fouzan went to Batu Berendam sports centre to compete our badminton skills. =.=
Im the worst obviously w/o proper badminton training from parents nor secondary school time nor primary school time. So i feeded alot...kena pawn every game. T.T
Then into friday, went to gym with Vanness after the BHM class. First gym session for me this semester. I can feel the rage of my muscle when i requested them to do what they are capable of doing it last semester. Conclusion: aku lebih lembik compare last sem. So on this particular day i say i wanna exercise everyday.
Saturday. Ask Sifu to go squash, then drag weisin, ororo along...have a great day squashing. The first time i found ppl squash with me in MMU since i join MMU. Wei Sin say he is the first time playing squash but the skills he possessed is like a pro. Sifu like always, is the pro of the pro.
Sunday. 1 of the best day of the week. Me, WeiSin, Shao Hwa, Vanness went out to have satay celup at Capitol. Everything is just normal until Miss.Capitol appear. I spot her first while she's still standing at the roadside wating for seat. Then i told them about that. The result is, the Miss.Capitol stunned all 4 of us a vr long time. Definitely a rare piece of artwork by the hand of the Maker. Should have taken a photo, but too bad all 4 of us are too chicken. =x
Pure guys outing dun like to take photos sial. I got ntg to upload except plain text. Haiz.....I WAN MY DSLR!
After come back from satay celup, and after watching a FIFA match, i forgot which and lazy to check back. I went swimming in ixora swimming pool~~~    See, im so 坚持 wat i told myself. EXERCISE EXERCISE EXERCISE!!
Monday, ntg big. I swim again with housemate at night.
Tuesday, the busiest day of the week since i got 7 hours of class. So except the boringness of class time. Ntg much. I skipped my exercise today due to the sleepiness of the class made me lazy. Btw, tuesday is a good day, cause i can see you. =)
Wednesday, Swim again. I can feel my stamina coming back slowly. Happy ^^
Thursday, our weekly routine of goin out badminton was canceled due to Khesvin's knee tendon is injured. So, instead of goin out for badminton, we did a more imba Thursday. 4 p.m. me, Aaron, UK, WeiSin, Sifu, Ororo, total 6 ppl went squash in campus. It was raining, but ntg can stop us to have a healthy lifestyle~~! Even WeiSin run from EP to Plaza Siswa for squash. So semangat sial! We stopped at around 5.30 p.m. due to the venue have to be taken over by a Co-curriculum squash class. HALT! this is not the end of the story, we continue the day by playing FUTSAL. We called Vanness to come join us for the FIFA fever. He said ok but we waited him while playing for like 40 minutes because he say he is trimming his nails! hahahaha....pattern manyak lah Vanness. This thursday, is tiring, yet satisfying.
Today, Friday, i dated Vanness to go to gym after BHM class also. HEALTHY LIFESTYLE CONTRIBUTE TO A HAPPY PEOPLE~
alright, its getting abit too long for myself. The rest of the stories, leave it for some other days.
BYE FOLKS, AND WELCOME TO MY NEW BLOG~~ ^^
Life Itself Review