COS rock on the night of supermoon. (Long post, lotsa photos)

- March 21, 2011
I started typing this right after i wake up from a tight sleep the second morning. I realized i was too concentrate on the performance and didnt take any photo. So, I waited the photos from photographers. So now, lets start!
ITS STRICTLY COS!
I thought i was goin there alone...
but
IM NOT!
I got my girl with me that fantabulous musical night!


on the night of 19/03/2011, its the night of supermoon. Where the moon come super near to Earth and become really round and big... 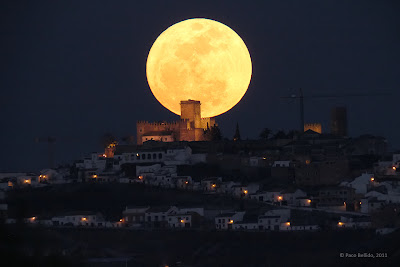 When i reach the venue..The feeling of concert is seeping into my cells. The venue is just so nice for a concert..Echo absorbing wall lining, controllable lighting, cinema styled seatings. My God, its way way way better than our school's main hall! I straight away turn to my girl and say:" The RM30 was totally worth it!"
Yes indeed, it's more than worth it when i leave the venue.


The opening song was played by the percussion team. Song name is 龙腾虎跃 which direct translated to the flying dragon and jumping tiger..=.=
The percussion team is very special to me cause kawan baik saya Daby dengan Fong Yee are in there! Of course also was there, the musical genius which i think she totally should go study in Victoria Musical College instead of studying IT in MMU, Mayi. Their play was so impressive and gave a punchy starts for the night. Seriously, i was deeply touched, first time, by a percussion-lead-performance. Photos:

The following 2 songs of the large ensemble was great too!

The ensemble.
After the ensemble which rises the temperature of the hall, the event continued by a 二胡(er hu) solo, a 笙(sheng) solo, a 笛子(flute) trio and a 文琴(wen qin) quintet. I cant find any photo of the 二胡 solo. WHY?
For the 二胡, the skills is impressive, the fingering is amazing. I always like the sound of 笛子 alot, this time they didnt disappoint too, they are great! As for the 笙, the sound are too sharp for my ears, i do not know is it the PA problem or in nature it sound like that. 文琴, to be honest, i expected alot from it, but i cant really find the sound i am hoping for from them. They should sound richer isnt it?

After the instruments showdown, a break was given before the content of the performance are about to take a change from traditional Chinese Orchestra into the mixture of Chinese Orchestra blended together with Modern Music. Instrument added in was electric guitar, electric bass and jazz drum. As usual, when pop music are inserted into a performance, the cheers are always louder. Its the mood thingy that causes this. The choir, yes the choir, they improved, for quite abit! Last year the choir got critiques from many many people but this year, they did quite well. Not to say perfect but it did not hurt my ears.
Then there was a few great singer that sang on the night, they are simply great, very great. First song was performed by Ellyn, “If We Hold on Together”. I remember she first sang in MMU during foundation. Shw was my Committee that time, we had an audition for singers on the song composing concert. She went for the audition and there she goes, a talented singer. Now, she improved alot, she sang really nice on A Touch of Symphony.
The second song, was performed by Ms. Putri Nurul Aainaa Rusli. Does this name rings any bell before i intro her? Yes? No?
She is the singer of MMU's anthem "Permata Dunia". Now you know who she is. She is also an Assistant Lecturer at MMU. She has a great voice, really great voice. She sang "My Heart Will Go On" originally by Celine Dion. Very touching.

The third singing performance is a duo, performed by the genius i mentioned, Mayi A.K.A Ms. Chua Su Ting together with Mr. Isaac Lim. The song they performed was "一眼瞬间" originally by ah mei 张惠妹 and 萧敬腾. This is the first time i listen both of them live. 1 word, impressive. COS mmg 卧虎藏龙...or is it only me that do not know? Anyway, photos!

Then, it's a performance of LeeHom's 你不知道的事 in Chinese Orchestra version. Truthfully, i do not like it alot. The performance was great, flawless but i should say a pop song like tat perform in chinese orchestra simply do not suit the nature of the 多变 of chinese orchestra, too repititive, after 2 time of the chorus, it was getting abit boring.
Another very spectacular part of the concert is the last last encore song, the rewritten chinese orchestra version of Wonder Girl's "Nobody". Written by Ms. Chua Su Ting (My God). Performed by MMU Chinese Orchestra Society. A simple ending short talk by the chief conductor of the night, Mr. Steven pushes the mood up a bit. Then he requested all the audience to do the infamous "Nobody's clap" together during the chorus. This performance give a absolutely perfect ending for the night.
The post is getting abit long and im posting it from office. =x
So lets end this post right now rihght here, where the memory stays.
Thanks for the great night! Keep growing! All the best!
p/s: i forgot about the credit thingy, thanks uk for reminding.
Photos taken by: Wan Chew, Kent, UK, Paco Bellido.
Life Itself Recommended......... OK I like it myself.. Review